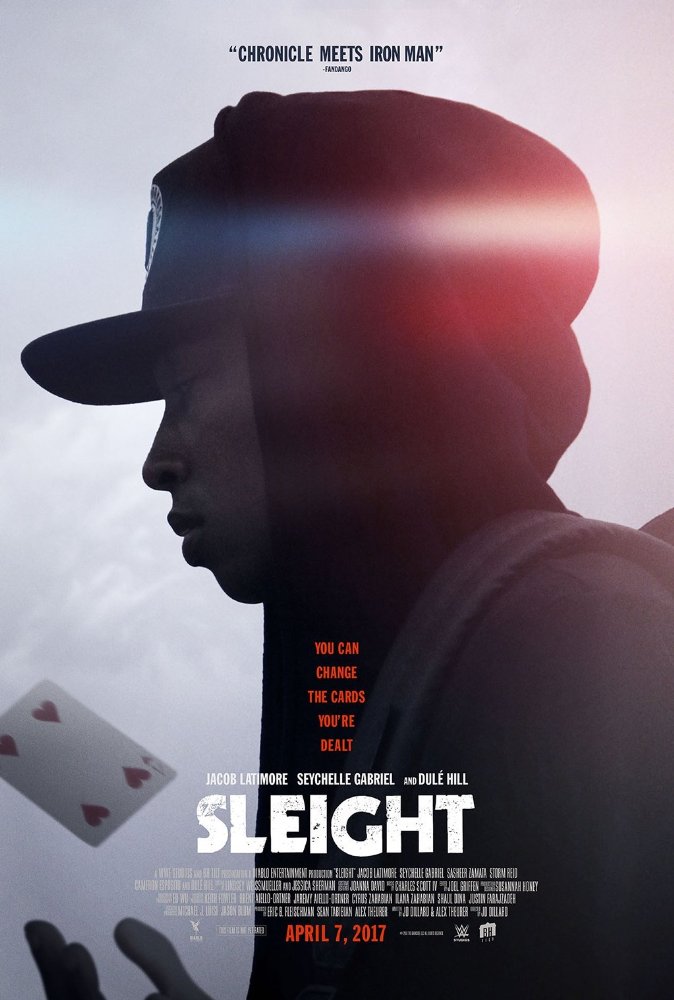 Who said the age of superheroes would never come again? –By now DC fans would probably be able to tell that I have seen the Justice League trailer. But speaking of superheroes, the upcoming movie Sleight seems to be gaining a lot of buzz from its second trailer release.

Sleight is a movie about a gifted young Magician named Bo, played by popular musician Jacob Latimore. Bo happens to be an orphan, who finds himself neck deep in a life of crime, driven by a desperate attempt to take care of his younger sister, Tina (Storm Reid).

However, when his involvement with the crime community begins to threaten the life of his sister and probably his own, Jacob has to learn to harness the full potential of his powers if he is to stand a chance at protecting the only person he cares about.

What is interesting to note about this movie is the fact that Fandango describes it as “Chronicles meets Ironman”. The first half of the trailer dedicates itself to showing us how Bo loved to use his magic tricks to impress girls. However, the second half of the trailer reveals that these magical talents are actually some sort of telekinesis. So in essence; superpowers.

Nothing is shown as to how Bo acquired his gifts. However, at some point, the trailer also reveals to us how he trains and pushes himself further. This helps him gain more control of his powers, and would evidently allow him to take on the threat.

Now, here comes the big question, what exactly does Fandango mean when it describes the movie as “Chronicles meets Ironman”? The first part is quite straight forward being that Chronicles  is a movie about young teenagers (played by Dane Dehaan, Michael B. Jordan, Alex Russel) who make a discovery underground that grants them super powers. It doesn’t take too long before one of the teens turns to the dark side. Hence, it’s easy to see, the relation to Chronicles would be that both movies have atleast a teen who test the limits of their super powers.

However, the Ironman reference is not as obvious to decipher. You see, Ironman is a billionaire playboy, who uses his intelligence and advanced tech suits to wage on war on crime. Could it be possible that Sleight would be a superhero movie after all? Well, we cannot rule out the possibility.

One thing is certain, you don’t have to wear capes to be a superhero, but time will eventually tell the kind of hero Bo is going to be as Sleight premieres in theatres on the 28th of April 2017.

Below is the official synopsis and trailer of Sleight:

After his mother’s death, a young street magician (Jacob Latimore) turns to dealing drugs at parties to support his little sister. When she is kidnapped by his supplier, he uses his sleight of hand and keen intelligence to find her.

Article Name
Sleight Might Be a Superhero Movie Without Actual Capes
Description
Speaking of superheroes, the upcoming movie Sleight seems to be gaining a lot of buzz from its second trailer release and it looks absolutely amazing!
Author
Enioluwa Awopejo
Publisher Name
Buzz in Motion
Publisher Logo

John Wick: How The Killing Began

John Wick: How The Killing Continues