Skip to content
You are here
Home > Buzz Meter > Buzz Review Of Jumanji: Welcome To The Jungle – Was It Better Than The Original? 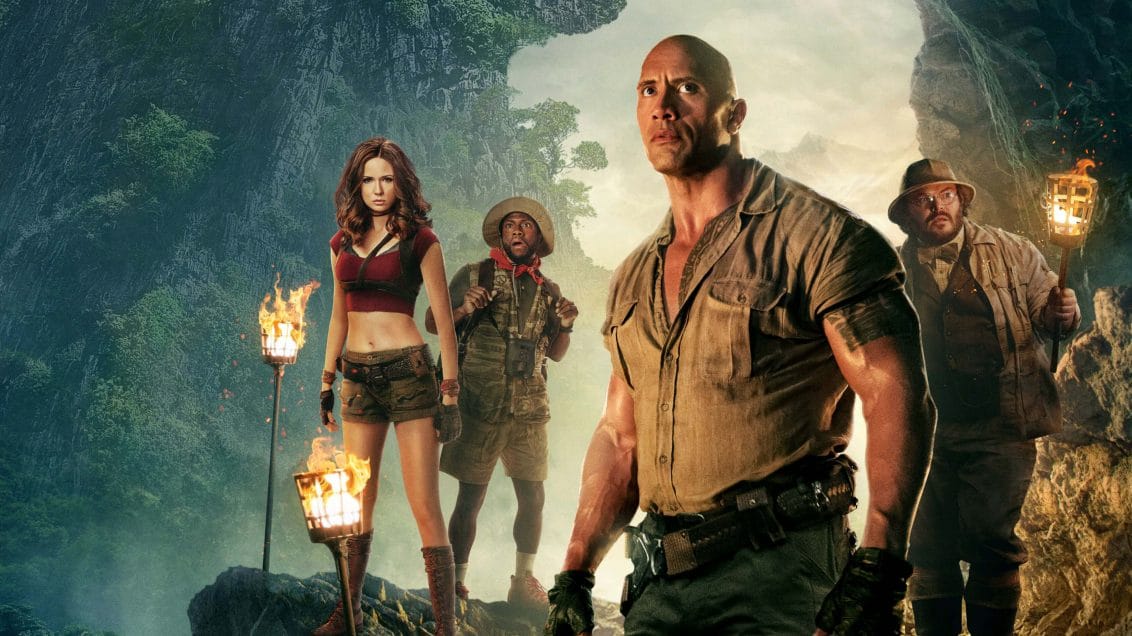 Everybody loves a perfectly constructed world of the wild. From learning to hone in on survival instincts, to being chased by carnivores and evil henchmen, nothing else gives an audience the unique thrill of theatrical mother nature in action. But to take all of that and infuse it with good comedy? now that takes things to a whole other level. Jumanji was the jungle justice movie we all deserved (sorry Tarzan). My Buzz Review of Jumanji: Welcome To The Jungle is based off pure evidence that anything can indeed be made better than it used to be.

At first, I was honestly worried about the film because the initial version of this flick won the hearts of major audiences and critics around the world back in 1995. Every movie studio knows how difficult it is to take a well received original and it make it better. Well, in a world where most sequels are given the cold shoulder, Columbia Pictures and Director Jake Kasdan took lemons, made lemonades and then turned it into a freaking cocktail.

Jumanji took things over the notch with some brilliant, doff-your-hat acting from its entire cast. The startup cast which consisted of lesser known actors like; Alex Wolff, Morgan Jeanette Turner, Ser’Darius Blain, Madison Iseman were show stealers even with the minute amount of screen-time they were given.

The main cast on the other hand brought their A-Game to this flick. Dwayne Johnson gave an excellent performance with a “smoldering intensity” you certainly need to look out for. Karen Gillan portrayed an interesting character as Ruby Roundhouse. Jack Black brought some incredible humor as the “sexy” Professor Shelley Oberon. Then to crown it all, Kevin Hart put forward one of the best performances of his entire career by owning the audience once again through some Oscar-worthy humor and shenanigans (ps he showed us all why cake could be dangerous).

Asides the creative delivery of the film, Jumanji was downplayed by a hazy plot. In a bid to keep things interesting, the film makers lost a bit of detail to the constantly busy scenes. However, the splendid progression of the plot and its investment in the characters made this flick stand out in so many ways.

In essence, I was eventually glad that a Jumanji remake happened and I definitely wouldn’t mind a sequel. December hasn’t really been a great month for Hollywood Movies, but Jumanji is certainly one hell of way to end your 2017. Hence, my Buzz Review Of Jumanji: Welcome To The Jungle would not be complete without a proper shout out to the studio that recreated fictional mother nature; Columbia Pictures…well done!

Let me know what you think about my Buzz Review Of Jumanji: Welcome To The Jungle in the comments section below.

Official Synopsis of Jumanji: Welcome To The Jungle (2017)

Four high school kids discover an old video game console and are drawn into the game’s jungle setting, literally becoming the adult avatars they chose. What they discover is that you don’t just play Jumanji – you must survive it. To beat the game and return to the real world, they’ll have to go on the most dangerous adventure of their lives, discover what Alan Parrish left 20 years ago, and change the way they think about themselves – or they’ll be stuck in the game forever.

Official Trailer of Jumanji: Welcome To The Jungle (2017)

Like Loading...
Summary
Reviewer
Enioluwa Awopejo
Review Date
2017-12-29
Reviewed Item
Buzz Review Of Jumanji: Welcome To The Jungle - Was It Better Than The Original?
Buzzer's Concensus
5

3 thoughts on “Buzz Review Of Jumanji: Welcome To The Jungle – Was It Better Than The Original?”