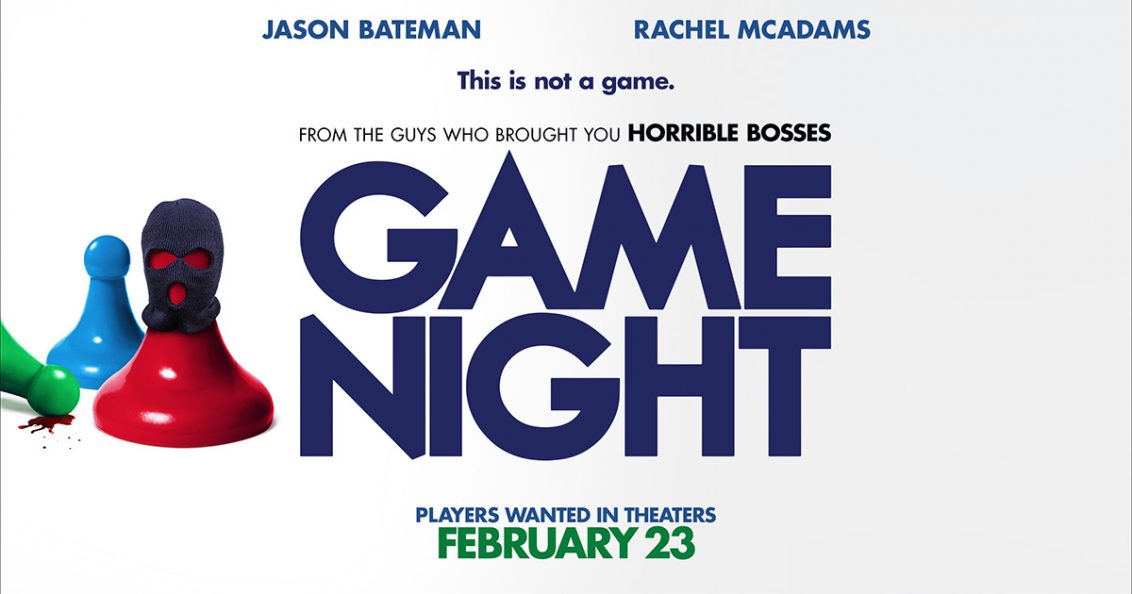 Game Night is a comedic, suspense filled and trip-wired adventure involving six supposed nerds. Unlike Pictionary, Charades, or Trivial Pursuit, Game night is a suspense filled adventure that takes unexpected turns at almost every scene. My buzz review of Game Night is about a film that fools you into thinking you have finally caught up with the answer to the puzzle.

This film starts off as a drag but gradually reinvents itself into a thrilling ride, with each scene carefully constructed to take viewers on a jolly rip-tide through a clue-laced adventure in one night. From a normal family house with a freaky cop neighbor, to a highway car chase laced with unexpected gun shooting scenes, I can assure you that the outcome of this film can not be easily deduced.

Max (Jason Bateman), who has kept a game night tradition with his wife, has the tradition distorted when his Brother Brooks comes to town for a business engagement. Things go crazy and the entire Game Night gang is sent on a new roller-coaster ride of adventure through the night. The plot hones in on its craziness and unpredictability as the secret ingredient to stealing the hearts of its audience.

Over the course of one chaotic night, the friends find themselves increasingly in over their heads as each twist leads to another unexpected turn. With no rules, no points, and no idea who all the players are, having the audience believe that this could turn out to be the most fun they’ve ever had…or game over. The cinematography was well put together for a believable traumatic experience and humor-packed showdown.

This hilarious gonzo comedy directed by John Francis Daley and Jonathan Goldstein, has a sharp script, clever direction, and an excellent cast. John and Jonathan were co-writers of “Horrible Bosses” (2011) and “Spider-Man: Homecoming” (2017). The duo have once again proved their ability to create another brilliant piece that is bound to put a lot of laughter in the mouths of its audiences.

Jason Bateman and Rachel McAdams play the married Max and Annie, who are smartly flirtatious and nicely matched, their mix should serve as a benchmark for most good, lead role actors and actress alike. Kyle Chandler, Jesse Plemons, Billy Magnussen, Sharon Horgan, Lamorne Morris, Kylie Bunbury were also brilliantly cast among others that were involved in this movie. The acting was generally believable and top-notch, putting comedy at extremes.

Although A sense of being played at the end of the movie might linger, this is the exactly the feeling the producers and directors would be hoping viewers have when the credits start rolling in, as the next outcome in subsequent scenes cannot be predicted.

Nonetheless, as far a funny films go, this was top-notch. My buzz review of Game Night is about a film that should not be taken too seriously, but yet still worth the time, effort and big screen. If you haven’t laughed in a while, do yourself a treat and see Game Night in theaters.

Let me know how you feel about my buzz review of Game Night in the comments section below;

Max and Annie’s weekly game night gets kicked up a notch when Max’s brother Brooks arranges a murder mystery party — complete with fake thugs and federal agents. So when Brooks gets kidnapped, it’s all supposed to be part of the game. As the competitors set out to solve the case, they start to learn that neither the game nor Brooks are what they seem to be. The friends soon find themselves in over their heads as each twist leads to another unexpected turn over the course of one chaotic night.